Science – Food and Forces for Ages 8 and Up 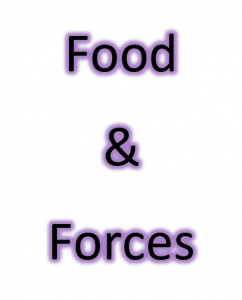 Food and Forces for Ages 8 and Up is a free e-book, as well as video in chapters (see below).  The chapters are all put together in the video but they could easily be split up for watching and discussing. Any of the chapters could be used as a springboard into several different science lessons.

Food Air and Water: explains to children the importance breathing, eating and drinking also of not wasting the fresh water and food that they have.

Fungus and Bacteria: this experiment looks at a rotting apple and banana to examine why food goes bad. Children start to learn about food hygiene and keeping food fresh. It explains how some of both fungus and bacteria are necessary and useful. They learn a little about the use of spices too.

No Plants, No Food: it is interesting to see how all food is dependent on plants, even meat, eggs and milk. The teacher puts all of their food on the table and they take away everything that comes from plants. The experiment leaves only water on the table. Children learn what plants need to grow.  It touches on photosynthesis but doesn’t talk about it specifically similar to its treatment of food webs.

The Science of Clothes: discovers where fabric comes from and how it gets coloured. Colouring, cutting out, sewing clothes, felt, tie dye, weaving, roller printing, knitting etc. are all touched upon.

Money Maths: this chapter is not really useful in my opinion. It discusses, very briefly, addition and subtraction as opposites and multiplication and division as opposites but it is not age appropriate, also dollar signs are used so all in all just not right for our children. Moving money is an odd force to discuss!

Tad’s Tale: the story of a tadpole, this is quite nice, it is a stop animation done with pictures.

Tech Forces: this gives a detailed overview of the space race. Space facts, gravity’s impact on cars and rockets and a well-documented space race history are included. This is a fairly long, comprehensive video chapter covering from the beginning of the space race to the development of the International Space Station and beyond.

Too Much Tech: talks briefly about TV, video games, time and  programming. It also looks at designing apps and games but mostly about balancing tech as toys against other toys and being outside exercising.

Science of Airplanes: exploring why airplanes fly, explaining the forces of flight. It explains the full circle of flight – overcoming gravity with lift, changing direction and finally touching on drag to slow the plane on landing.

Science of Cars: looks at making cars in 7 steps – what each part does as it is built, covering air pressure and gravity, again. Clever.

Food and Forces is a very useful set of videos which could be shared with parents and would be great for home discussions about food and forces scientific concepts.