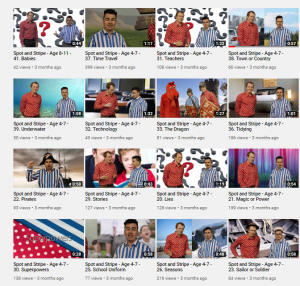 Spot and Stripe are the two characters used by The Philosophy Man to create philosophical videos for children. The videos usually raise a question and hand it over to the children to discuss. They would be great for online lessons where everyone could watch the video together then carry on the discussion where the video stops.

“From small beginnings in 2008, The Philosophy Man is now the UK’s leading independent provider of P4C training and workshops. Jason and Tom send free p4c resources to over 17,000 educators worldwide, and train upwards of 2,000 teachers a year through INSETS and Keynotes in our streamlined and accessible Philosophy Circles approach to P4C. We spend as much time in the classroom as we do delivering courses, and we ‘show our working’ in front of children of all ages.” (The Philosophy Man)

As well as the school work, the Spot and Stripe videos are all streamed onto YouTube so could be used as a home resource to ring the changes for the curriculum. Children could watch a video and write their own response to it, then try to write the opposite viewpoint.