“Ten Pieces Trailblazers challenges students to rethink orchestral music – what it sounds like, who can make it, and how it’s used – through ten trailblazing composers and their pieces of music.

This new set of pieces showcases works that have helped expand our musical horizons, pieces that have introduced new cultures and sound worlds into the orchestra, and composers whose lives and works have made them pioneers.

Florence Price – Symphony No. 1 in E minor (3rd movement)
Florence Price inspired by spirituals and west African rhythms became the first black female composer to have her work performed by a major orchestra.

Steve Reich – Music for 18 Musicians (excerpt)
Steve Reich used his interest in African drumming, which helped to invent a whole new form of music: minimalism. He inspired loops and samples that we are so used to using today!

Heitor Villa-Lobos – Bachianas Brasileiras No. 2, The Little Train of the Caipira (finale)
Heitor Villa-Lobos brought inspiration from his home in Brazil, into the concert hall and created a new sound – a music machine!

Antonio Vivaldi – ‘Winter’ from ‘The Four Seasons’, Allegro non molto (1st mvt)
Antonio Vivaldi was one of the first people to compose music that was designed to remind listeners of places and things in the world around them. The sharp sounds, frost, wind etc – winter!

Hans Zimmer – Earth
Hans Zimmer, with his powerful film soundtracks, including electronic instruments, loops and samples which  that have influenced many modern musicians.

Ten Pieces Trailblazers, from BBC Teach, is a brilliant introduction to classical music for any KS2 classroom.

For each piece of music there is a whole lesson plan, a PowerPoint presentation, a downloadable MP3 and an instrumental arrangement. There are also follow-on lesson ideas. The composer is introduced with lots of information given for the piece of music. I listened to Gershwin’s Rhapsody in Blue and the narration was really interesting! It brings the music to life for the listener.

To keep up with the news, new pieces, projects, resources etc, it is best to sign up. 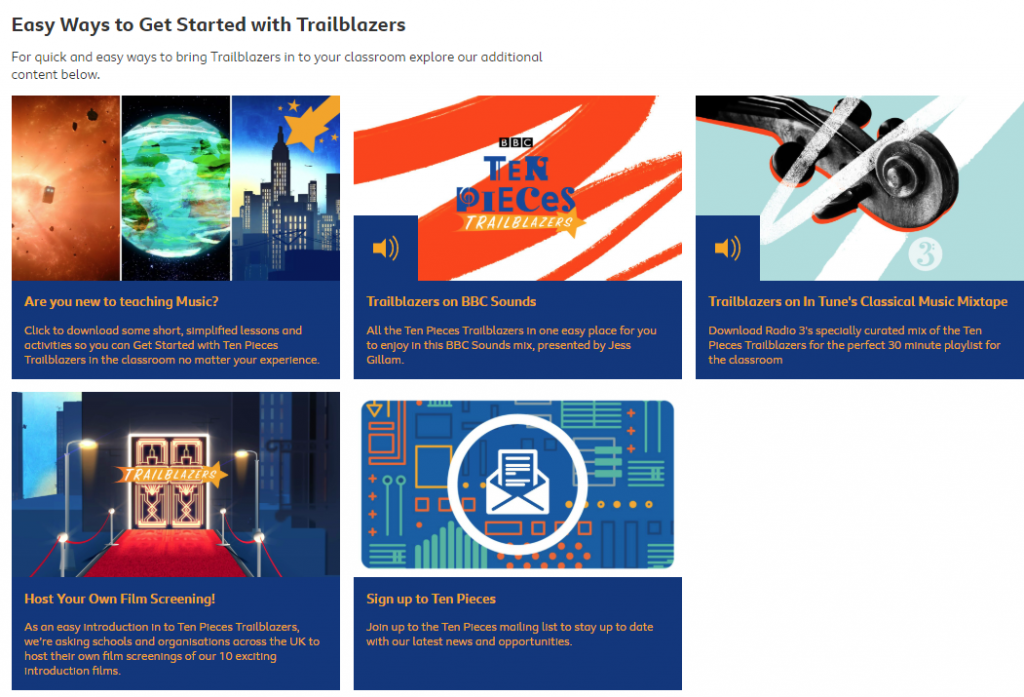