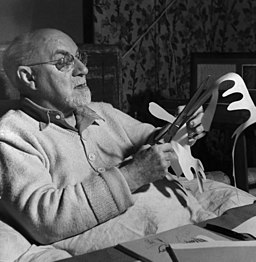 Studying Matisse, even for the youngest children offers a great opportunity to learn how to use scissors and bright colours, whilst making collages. The Snail has been replicated many thousands of times in infant classrooms; though I have to admit, I never knew there was an image of a snail on the well-known picture until I read it on Tate Kids!

Matisse and Picasso were close friends and there are some similarities in their work, especially in the use of colour to express emotions – but it is the collage that makes Matisse stand out and be so useful in primary school art. Late in his life, Matisse was bedridden and unable to paint and it was then that he started experimenting with paper cut outs.

ArtsyCraftsyMum has collected, or devised ten Matisse projects for children:

“Color is something that influences us right from childhood, infancy even. Babies delight in bright colors, which explains why most of their toys are in primary colors and bright tones. But for French painter, Henri Matisse, color was much more; it was an expression of his soul. He often painted in slightly unnatural colors, and a painting that looks like it has only a few colors at first glance, shows several more on deeper inspection. He felt that “with color one obtains an energy that seems to stem from witchcraft.” That was the effect colors had on him – mystical, magical and immense!” ArtsyCrafstyMum

When studying Matisse, it is important to discuss the size of his works, The Snail is huge as are his other cut-out paintings. It would be very easy to compile a whole class picture from  individual creations in the style of The Sheaf (below).