Roy of the Rovers

in an attempt to engage more children and get them enthusiastic about reading, Roy of the Rovers and, just as importantly, his football playing sister, Rocky, are being brought to life in a new, up to date version of the old comic favourite. The comic book format has engaged children for a very long time but seems to have dropped out of popularity in recent years. However, Rebellion and the National Literacy Trust are bringing 10,000 new books into the hands of needy children around the country.

“Charting the career of charismatic Melchester Rovers striker Roy Race, Roy of the Rovers first appeared as a strip in Tiger in 1954, proving an instant smash with football-mad boys. Graduating to its own comic in 1976, Roy of the Rovers was where a generation of British football fans went for drama and glory, and ran for over 800 issues. Extolling the virtues of fair play, teamwork and great goals, Roy of the Rovers is the definitive football comic, and returns in 2018 with a brand new story.”( https://downthetubes.net/?p=102397)

The books can be purchased from the Melchester Rovers website and there is also a competition for schools to get involved with:

“Rebellion and the National Literacy Trust have partnered with The Football Association to launch a free live story following the journey of England’s Lionesses at the FIFA Women’s World Cup in France this summer (7 June – 7 July). This story will be written, chapter by chapter during the competition but the first chapter can be read now.

Written by bestselling children’s author Tom Palmer, Rocky of the Rovers: France 2019 will feature a popular trio of characters from the recently rebooted Roy of the Rovers series, published by Rebellion. Readers will follow the adventures of Rocky Race, her brother Roy and her football coach Ffion as they travel around France to cheer on the Lionesses.” (Rocky of the Rovers) 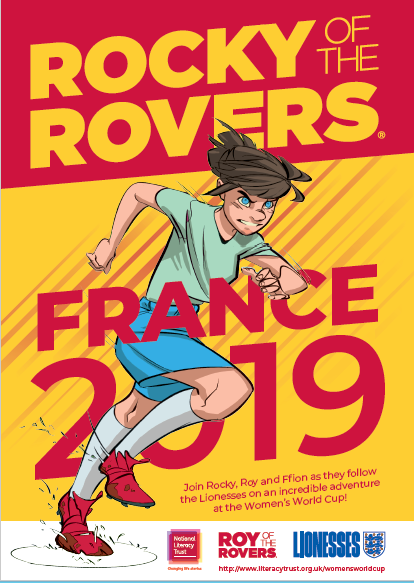