The history of transport is a very common study for many KS2 history lessons. The video below is a really useful resource about the development of the transport system in Manchester; not local but covering absolutely everything in a timeline, discussed as it goes along, with photographs to support the narration.

It starts with the horse and cart, moved on to canals, buses, trains, trams and cars. It notes key changes such as Queen Elizabeth coming to the throne and changes of Prime Minister. Even things such as the Moon Landing and the development of the World Wide web are shown in the time line. It comes right up to the present day where the trams have been bought back, the canals have been refurbished and it finishes with looking forward to the future.

So – very clearly based in Manchester, but, a ten-minute talk through of transportation through the ages. In my opinion a great summative video.

When students watch the video tour, if they want to explore a specific time, there is also an explore tool.

I scrolled back to post war and took this screen shot of 1946. Children can see buses, one car in the car park, queues of people to get on the special buses to go to the football match! Some of these photos are a great source of primary source information. 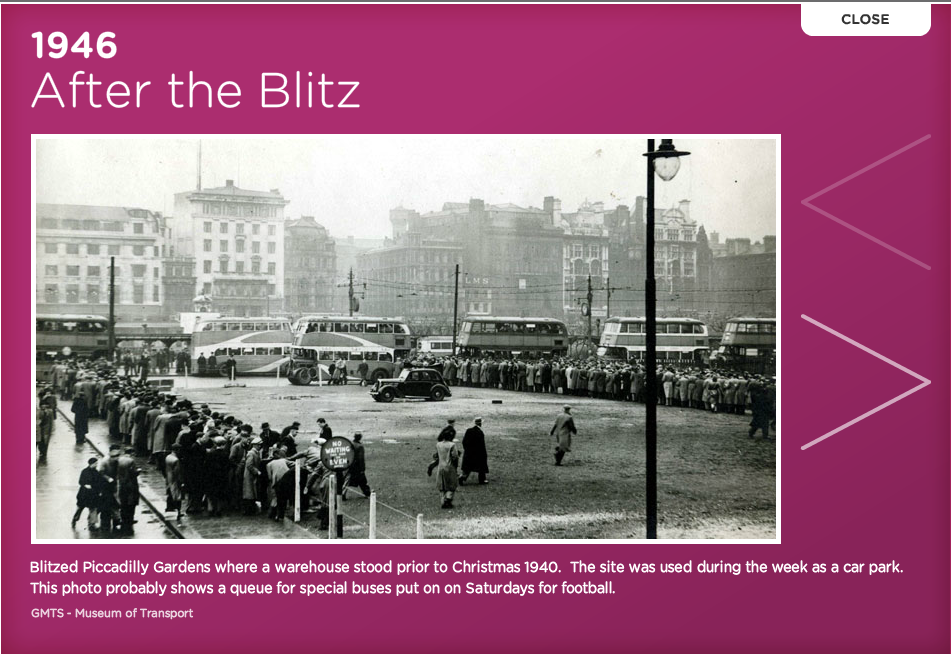 There is an archived “Short history of Public Transport in Greater Manchester” where, it would seem, that some of the information in the video may have been found.

“ At their maximum, the tramways of this company extended over 89 miles of route and employed 515 cars and 5,300 horses, working from 20 depots. Routes stretched as far out as Oldham, Stalybridge, Stockport and Patricroft. The company also operated a number of horse omnibuses in the outer districts, where traffic was light.”

These make for interesting discussion points about the history of transport, the numbers of horses is astounding to me, they are figures that I have never seen before.

For the video see: http://www.dingding.org.uk/games/manchester/noanorak/index.html

Note. Flashplayer needs to be enabled to watch this video