The Houses of Parliament

The Houses of Parliament is shown in an interactive story told in a set of ten 360 videos, starting from Westminster Bridge. It has been developed by CNN. Each section is narrated and there are also labels to click on where further information can be found. Viewers click and drag around the image to see a 360 degrees view.

“Welcome to the Houses of Parliament, a link between old and new, royalty and democracy. There has been a royal palace on this site for more than 1,000 years, but the current Palace of Westminster is less than 200 years old. Designed in neo-Gothic style, it was built in the Victorian era, after a fire destroyed the previous building. Today’s palace is the home of the House of Commons and the House of Lords, where British laws are made.” (CNN)

The explanations in the narrations for each video are very clear, some of the concepts may be a bit sophisticated but over all it uses very straightforward language.

Each room has some written information and interesting anecdotes from history such as this one:

“Central Lobby now contains an important reminder of the women’s suffrage movement: the grilles that used to cover the windows of the Ladies’ Gallery overlooking the House of Commons. They were supposed to keep MPs – all male in the 19th century – from being distracted by women watching proceedings. They were moved here after women campaigning for the right to vote chained themselves to the grilles in protest.”(CNN)

On the right hand side of each video there is an icon for the image below which gives access to each section: 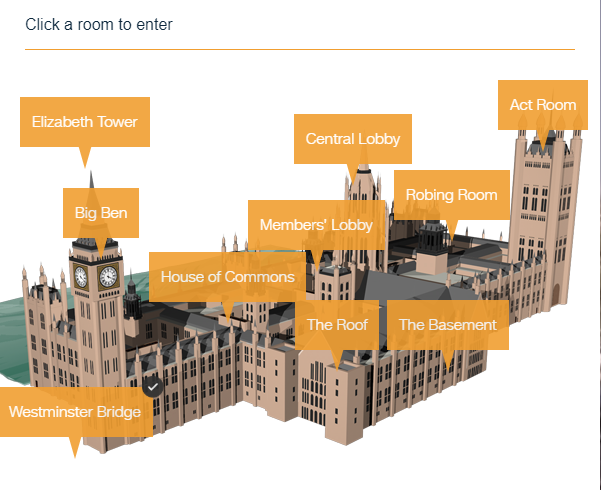 The basement, of course, is the site of the gunpowder plot and that is mentioned in that particular video! The upcoming bonfire night may be a good time to show a little of this great historic building in school!

All in all, this is a fascinating bit of work carried out by CNN and is well worth spending a few minutes exploring, if it fits with your curriculum – it certainly demystifies the building itself!