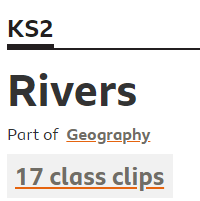 ‘Rivers Class Clips’ is a set of 17 BBC video clips teaching about rivers and suitable for use in KS2. It tends to focus on the effect the rivers have in their locality rather than the geography of rivers. They need Flash to play them so are not suitable for tablets. Most of these rivers class clips would fit better into other geography topics than a rivers topic but there may well be one to fit a specific need in your planning!  The two most useful of them are about the water cycle, which I have listed first.

Clip 16 – The Water Cycle. The water cycle is essential for all living creatures – here it is explained in detail.

Clip 1 – A child-led tour of Füssen in Bavaria, in this clip children are asked to compare the life of the child showing the clip with their own lives. There is lots of information about living in Bavaria but not too much about rivers!

Clip 2 – Glasgow and the River Clyde, this talks about the development of a city around a crossing place on the river and the growth of the port. There is a bit more information about rivers…

Clip 3 – Expedition to Guyana – This clip could be used as part of a study on rivers, or life in the rainforest. It shows the river being used as a transport network.

Clip 4 – How does the River Nile help people survive in Egypt? This clip could be used to see how a river can help people live in a very dry land which is mostly desert. It is much more about historical Egypt making use of the river rather than about the actual river. I would use it in a topic on the Ancient Egypt rather than a topic about rivers.

Clip 5 – Journey of the Nile, part 1 of 3 is a description of the contrasting seasons in Ethiopia

Clip 8 – Rivers and waterfalls in Guyana’s rainforests – Views of the rivers running through the rainforest of Guyana. There is no narration on this one.

Clip 10 – The lower reaches of the River Clyde in Scotland are explored by boat. 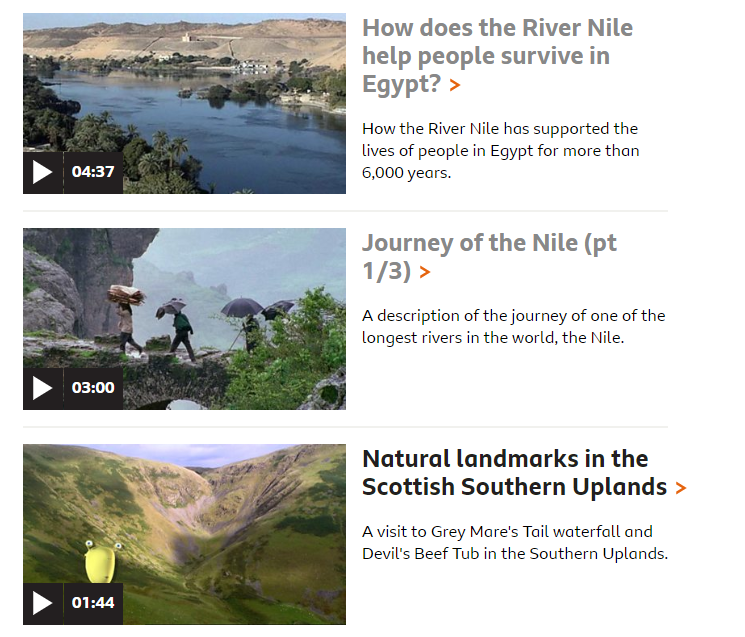